Today we interview Astrid Sauvage, from year 2011. She trained in the German booth and we thought it might be nice to offer the interview both in German and in English, just in case you don’t have German as a working language. 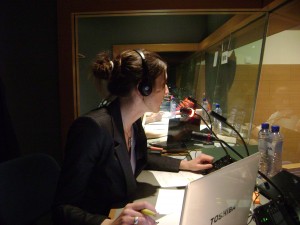 Tell us a little bit about you as an interpreter

Since I finished the EMCI course at the University of La Laguna I have been working as a freelance interpreter and translator in Brussels. In addition, I work part-time for the European federation of milk producer organisations, the European Milk Board (EMB), also as an interpreter and a translator. I interpret at their General Assemblies, Board meetings, press conferences, meetings with policy makers and other stakeholders.

When did you study for the Masters in Conference Interpreting at the University of La Laguna and how did you find the experience?

I did the 2010-2011 course and without any doubt I can say: I loved the experience. Before that I was working in another field and then decided to take up studies in order to become an interpreter. So what I enjoyed most during the Masters is that it was a very intensive course which goes straight to the point. You learn the technique and get to know a lot about the profession, and above all you get a lot of training and useful feedback.

How was the experience of studying in the Canary Islands?

I consider the fact that the Masters is in Tenerife as an advantage. It gives you the necessary distance to really focus on you goal: pass the exam and become an interpreter. Also there are many possibilities to do trips to the beach or to the mountains during the weekend, so you can relax and “de-stress”. And, coming from Belgium, I must also say: the big amount of sunlight really helps to be in a good state of mind and to have the energy you need!

What do you remember about the course, your colleagues and the teachers? Any funny stories?

The teachers are very helpful and supportive, while giving you clear and honest feedback – which is what you need. And at difficult moments you can always count on your fellow students. As for funny stories, I do remember some occasional lough attacks. I recall a particular one at the beginning of the course, during a training session, when I had to interpret quite a sad speech and I burst out laughing several times (and not only me). In another context this could have been very embarrassing.

After the Masters, how was the transition to a working interpreter?

Quite difficult, as I had expected. Although I was quite lucky to get a part-time job which gives me some financial stability and at the same time the opportunity to interpret on a regular basis. This allows me to keep my skills active, to get used to being in a booth and interpreting and also to get in touch with other interpreters.

It was and is quite difficult indeed. You may get several offers for the same day and then no single offer for a couple of weeks. This is what makes it very hard in the beginning. But I can see that with time it gets easier as you get to know fellow interpreters who can offer you work. As for anecdotes… Maybe something I would never have imagined before: during the Masters, public speaking was not one of my strongest points. But a few months after my graduation, as part of my job at the EMB, I found myself standing on a platform, during a major farmers’ demonstration, screaming (i.e. translating) into a microphone to hundreds of milk producers. It was quite an experience – and similar occasions have followed.

What was your language combination when you did the MIC and what is it now?

My language combination during the MIC was English, French, Spanish and Dutch into German. For the moment I have dropped Dutch but I added a retour, French, by working on it with a colleague. I was educated bilingual German-French, but did not add any retour during the course, simply because it was just too much at that time.

Are you on any social networks? How can we find you on Twitter?

You can find me on LinkedIn and I also have a profile on ProZ. As for Twitter: not yet…

Finally, do you have any advice for anyone considering studying conference interpreting?

Well… I think anyone who wants to study conference interpreting should be aware that choosing this path is not an easy option. It means a lot of work during the studies and it does not stop after getting the degree. But if someone is very motivated and interested in many topics – and even willing to read about others that do not interest them – it is an extremely enriching profession. It is very varied as for subjects one will be working with, people one is going to meet etc.

My advice: start preparing already before the Masters. Read a lot, stay updated about what is happening in the world. And, most importantly – while doing that, try to consciously remember expressions, vocabulary, different ways of saying things, even though they might appear very logical to you at that moment. Because one thing is to know a word passively – but it is entirely different when you have to come up with it yourself while trying to listen to what is being said and thinking about what you are going to say next!